Working initially with two members of our executive network and supplemented with work by Bain & Company, we pursued an SAP-centric acquisition strategy in the $75 billion IT consulting sector that is addressable by SAP solutions. With a market leading 33% share as of Q3 2008, SAP created a highly fragmented ecosystem of niche consulting firms as a vital support structure for SAP software implementations across a variety of industry verticals.

In July 2009, BHC acquired /N SPRO, a Montreal-based SAP consulting firm specializing in HCM applications. Additional acquisitions of Dey Fischer in August 2011 and Vesta in December 2012, created a multi-scope holding company covering multiple industry verticals with three specific applications and each being a “preferred SAP partner”. We consolidated these services under a common holding company in 2014 to create Rizing, LLC led by former Vesta CEO Mike Maiolo and CFO Carl Graves. Company operations covered North America (US & Canada), Middle East, Europe, and Australia. Through a combination of acquisition and organic growth, sales and EBITDA grew from $3.8 million and $0.9 million, respectively, in 2009 to $92.2 million and $22.1 million, respectively, at the time of exit in January 2018. The business was sold to One Equity Partners in January 2018. 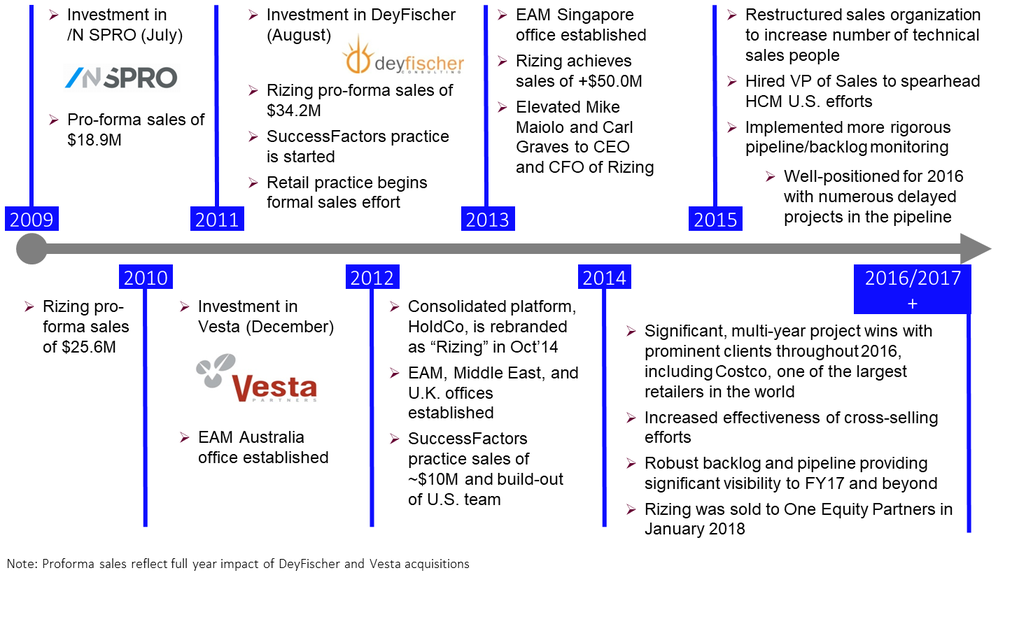 The results shown above are unaudited on a gross basis before fees and expenses.
Past performance is no guarantee of future results.